Back in August (yes, I know, I'm very, very behind on my blog posts!), a friend of ours from back in our college days came to visit. Dan was teaching at BJU during the time Jim was a student there, and Jim worked for Dan for a while. About the time we moved out of the Greenville area, Dan's second child Jonathan was born. We saw him only once, I believe, until now. Dan brought Jonathan to Alaska on a father/son trip before Jonathan gets married this December.
I've never seen two people blitz the tourist attractions as devotedly and fervently as those two! Dan's quest for as much halibut as he could eat led them to some fine (and some, uh, local) dining establishments. They booked a halibut charter out of Homer and went salmon fishing on the Kenai River, both trips resulting in a nice big box of fish to take home with them. Hm, let me see if I can remember everything they did during the week they were here... They spent much of a day in Girdwood, seeing the resort and the skyway tram and the wildlife rehab center there; visited the chainsaw carver outside of Sterling; drove to Seward, hiked to the glacier, and went to the Sea Life Center; met up with friends-of-friends in Soldotna a couple of times; and took a flightseeing trip out of Anchorage.
I asked Dan for some photos he thought were memorable ones from his trip here, and these are the ones he chose.  This brown bear is at the wildlife rehab park. The animal Dan and Jonathan talked about most, though, was the porcupine. Or rather, the porcupine's stinky smell! 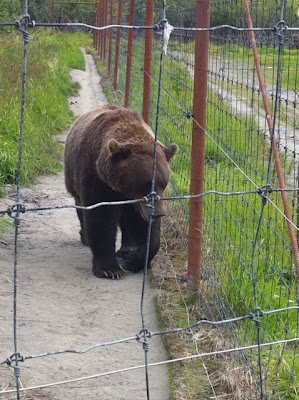 I'm surprised Jonathan was so easily distracted... He's engaged to a lovely girl, but one pretty face at the chainsaw carver's park could sway him so!  (click to enlarge) 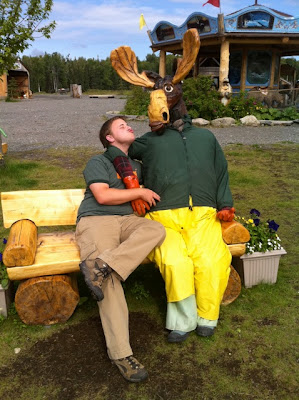 Bears on the shore during their salmon fishing trip (enlarge this one, too): And of course, some crazy local people they encountered somewhere: 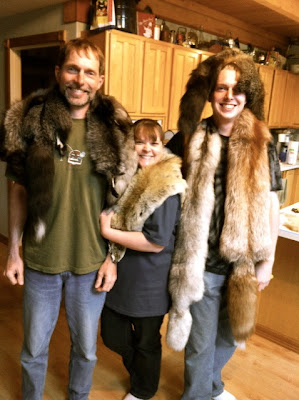 It sure was nice to see them again. We hope they come back soon, maybe this time for the Fur Rendezvous!
Posted by Deanna at 6:43 PM No comments:

The end of summer was busy!

Hello there! Did you think I forgot about you? Um, well, I sort of did. But it's just because it's been so busy around here for the past couple months. Here, let me catch you up:
After Big Jim's visit, a college friend of ours came to visit with his son Jonathan (more on that in another post). They were here for a little more than a week, and it was so nice to see them again.
We went to the gold panning club's claim on Crystal Creek to get some buckets of silt and dirt to sluice and pan at home. It was so lovely and lush out there, but far too mosquito-y for us to want to stay longer than we had to. Here, Jim shovels the dirt from the bank while James screens it: 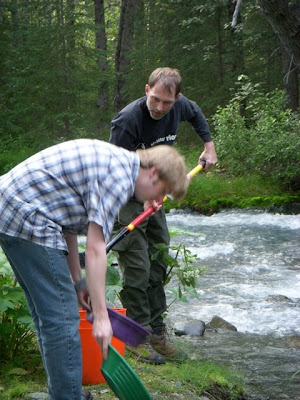 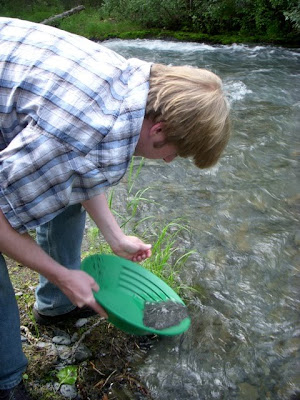 And I'm just sitting on a fallen log hoping the bugs don't eat me entirely. 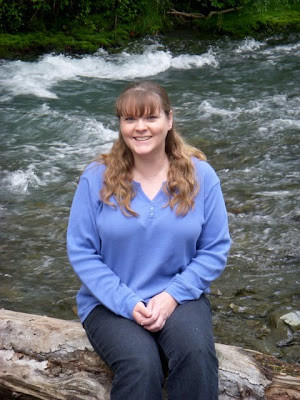 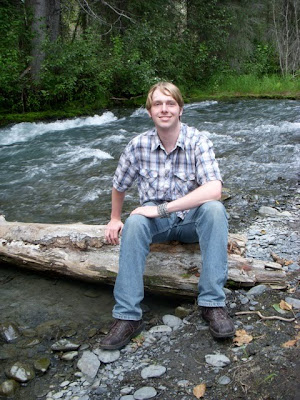 We made a trip to Homer once the summer's unusually rainy weather cleared up enough on one of James' days off so that we could actually SEE Kachemak Bay rather than just see the rain clouds. We took Moya with us. 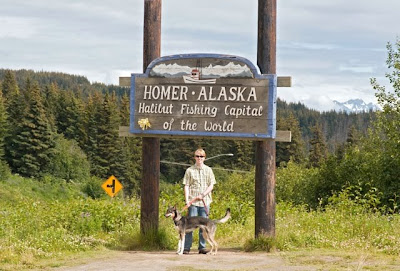 Moya's first time on the Homer Spit was basically just us trying to keep control of her while she pulled us all over. Moya loves the beach and going for walks and it's not easy steering a dog as strong as she is! We lost her dog tags somewhere on this beach. 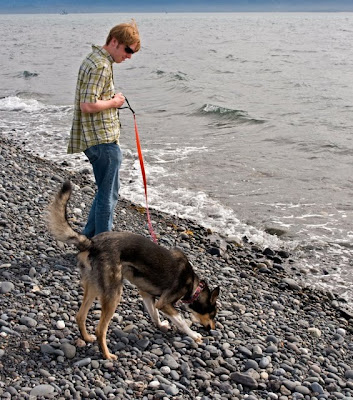 Jim and James have a little Captain in them, haha, in front of the famous Salty Dawg Saloon on Homer Spit. 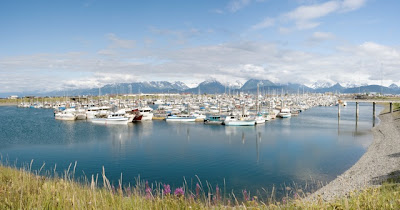 My big summer project was helping James work on his Dagorhir costume for his college role play group. I think we did pretty well, considering that neither of us knew what we were doing but did it anyway. He's got several mix-and-match costume pieces now and he can dress according to his mood and the event he's attending. I love this picture: 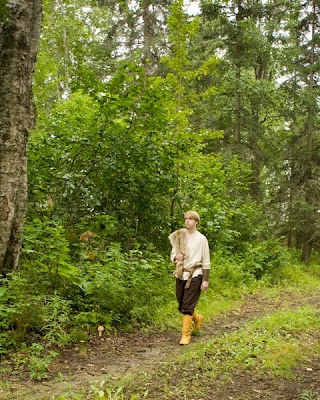 The vest and boots were made with elk that was a gift from my brother. There's plenty of elk left for me to (if I have time) make myself an outfit to wear while manning my craft fair booth this fall. 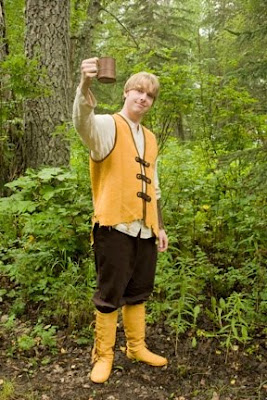 A more Barbarian feel to this outfit... ghillies, and a belt made from a wolf leg and paw. 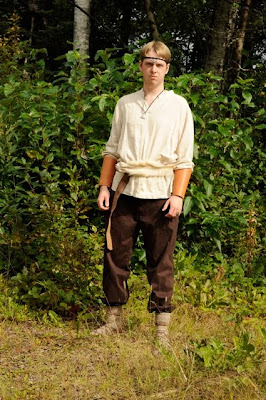 A close-up of the Awesome Boots of Awesomeness: 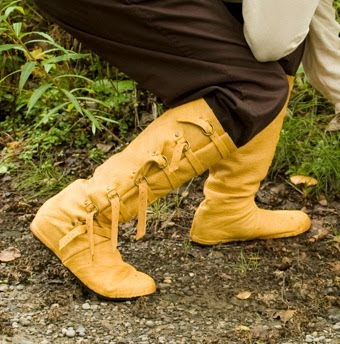 A close-up of the ghillies: 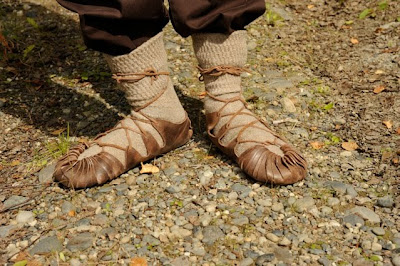 And, through the miracle of time travel, I can show you how James will look at his first Dagorhir event. He's the one in the brown tunic and elk boots, with his back to us. 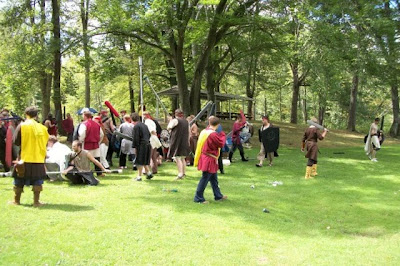 We've been eating a lot of quail eggs this summer, too. 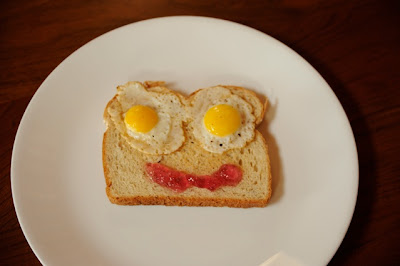 Before we knew it, our summer was over. 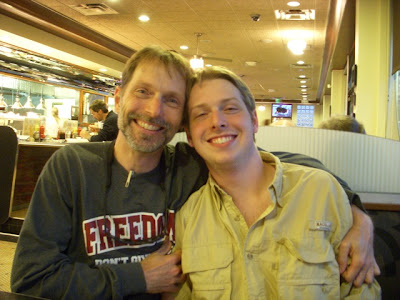 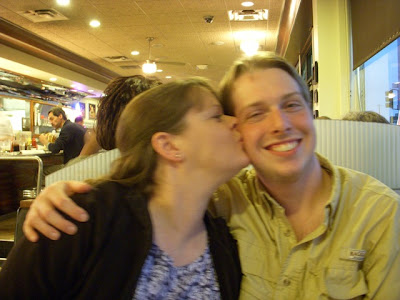 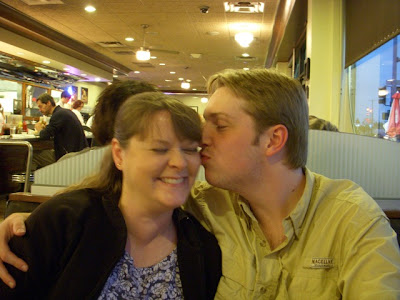 Have a great semester, James. We'll see you at Thanksgiving! We love you!
Posted by Deanna at 1:18 AM 1 comment: