Three weeks have passed in our Alaska Food Experiment! Here's what we ate this week:


This week passed very quickly! Even though I didn't take a lot of time to cook, there were still new foods to try - bacon and ham! Now, I know what you're thinking, that bacon and ham aren't new foods, but they seem new when you brine and smoke them yourself. Jim smoked about 15 pounds of applewood bacon this week as well as a whole ham. We had some of the ham for dinner on Saturday night. It is delicious! 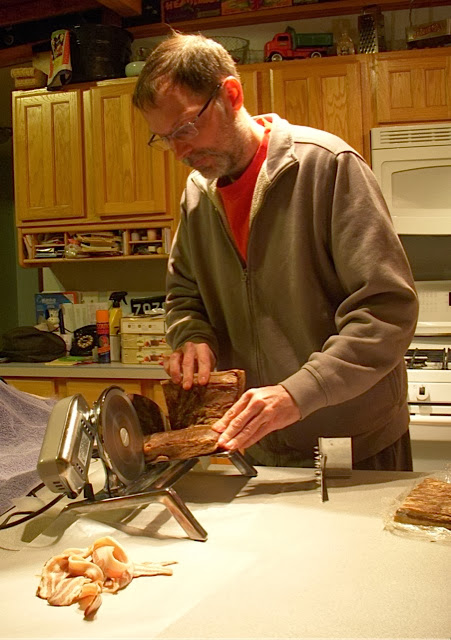 Jim slices the slab of bacon on an electric slicer.


My weight loss has slowed down but still continues. I've lost eight pounds since November 1.

Next week is Thanksgiving. I think I have all the menu items just about figured out, and can make everything we want to eat with only a small "cheat" to the all-Alaskan plan. Although holiday meals are exceptions to the plan, Jim and I have decided to see just how close we can get to traditional feast foods without using Outside ingredients. Stay tuned next week to see how we do!

Posted by Deanna at 2:33 AM No comments:


The second week of the Alaska Food Experiment is behind us!  Woohooo!!!  Here's what we ate:

We finally got some snow on Sunday late in the day, and it is still on the ground. If I'd stayed with my original plan of waiting to start our food experiment until the first sticking snow, we wouldn't have started it until this past Monday. I'm glad I didn't wait so long. I've lost six and a half pounds so far this month! If I'd known the weight would be coming off so easily, I might have started the experiment in October, haha!

As far as trying new recipes goes, the Finnish barley cookies are a hit, and I'll make those again, but add more spices next time. The pork rinds? They were okay, but not as good as the kind you buy at the grocery store. I have more to cook up so I'll experiment a bit with that and see if I can get the hang of making them puffier than this first time.


Honeybee is not sure that snow is a good thing. 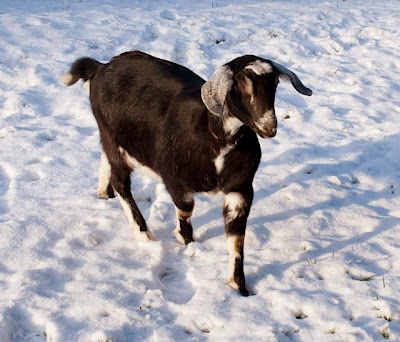 
If you're not sure what this is all about, start here.

Even though Jim desperately wanted me to name this project "The Hunger Games," I'm happy to report that nobody starved to death or even went very hungry. Here's what we ate this week:

Friday November 1:
Breakfast is fried eggs each morning unless otherwise noted
Lunch - steak stir fry with cabbage and carrots (confession: half a leftover ribeye steak was one thing I  didn't want to give to the chickens when I cleaned out the fridge, so even though it's not local, we ate it. But that's it.)
Supper - pork chops with honey apple butter and steamed zucchini with goat butter 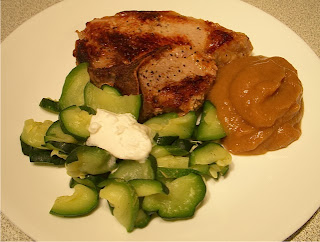 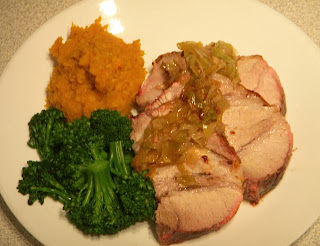 And here's where all of that came from:

So... Besides not starving to death, how did it go? Remarkably well, I must say. A few years ago, I had to go on a very restrictive diet for health reasons, and this is not nearly as bad, as far as taboo foods go. While I do miss the ready availability of handy prepackaged snacks, I was able to say goodbye to them fairly easily. I expect I'll eventually figure out some recipes for snacky things but for now, I'm okay with the occasional piece of cheese or jerky. The transition from Diet Coke to kombucha was not difficult at all, which surprised me. What was hard, though, was changing the errand-day habit of going through the drive-through at McD's for a soda and grabbing a sweet at the grocery store checkout. Today was errand day and I can honestly say I didn't really want the drink and sweets... but the habit was there and that was the hard thing.

I've lost four and a half pounds this week, cutting out the junk. Yay, me! I don't know if it will stay off or if I'll lose more, but I hope so!

Time management is an issue for me and scheduling work so that I have dinner planned AND thawed by 4:30 has presented a problem on more than one day, I confess. I'm getting the hang of it, though. I've also discovered that, while I do know barley flour and wheat flour are not at all the same and are generally not interchangeable, I couldn't resist trying some recipes by substituting barley flour. Limited success. Needs more work. And nothing beats butter for frying an egg. Lard is good; lard-fried eggs are mediocre. Next year - stockpile more butter!!!

For the first time in our lives, we can point to nearly every single thing we've put in our mouths and tell you where it came from / who grew it / harvested it / butchered it / caught it / foraged it. I have a better appreciation for the amount of work it took to bring it from field to table, to blanch and freeze it, dehydrate it, can it, culture it, age it, cook it. It's a new feeling, being that connected to my food. I think I like it.

Not sure what that is? Well, let me explain...

I've read about people who have set their own goals for eating only locally-grown Alaskan foods for whatever length of time they've decided would work for them. I've heard of them lasting as long as a year and as short as two weeks. My goal is to eat only Alaska-grown foods for two months. I sourced my vegetables and some fruits from farmer's markets, a Community-Supported Agriculture (CSA) subscription, a gardening trade group, small amounts of local produce from the grocery store when they've had it available, and gifts from friends. Our meat is mostly pork and beef grown here on the Peninsula, as well as moose, our own poultry and eggs, plus additional poultry bought from the feed store. Our goats give us milk, cheese, butter and cream.

Every week, I'll post what Jim and I ate for the past seven days.

There will be a few small exceptions to the Alaska-only rule, and here they are:

Beverages. I've decided not to restrict beverages, within reason. Jim is a willing participant in the Experiment, but this wasn't his idea. He's been such a good sport and enabler that I'm not going to ask him to give up his beloved coffee and tea. As for myself, I'll be giving up sodas in favor of water, locally-grown fruit juice, or home-brewed kombucha.

Leavening agents. Not that I think we'll be using them often, but just in case I decide we want pancakes or muffins, I'll need some baking powder or baking soda. There are ways to leaven breads without them, and it was my original intention to avoid them, but honestly, there are enough things I make myself that I decided to have this option in my back pocket, just in case.


Cheese starters and cultures. I milk my own goats and make my own aged cheeses. I think that amount of devotion earns me some latitude there, right? Of course it does!


Seasonings. I'm fine with making my own sea salt, but other herbs and seasonings, not so much.


Holiday meals. I've got locally-grown ingredients for much of the traditional holiday feasts, but here again, the Experiment wasn't my family's idea, and I don't want to ask them to skip pie, for example. If I do use non-Alaskan ingredients in my holiday meals, I promise to confess them to you.

There you have it: our Alaska Food Experiment!
Posted by Deanna at 12:48 AM 2 comments: