We've got more snow! After a whole week last week of temperatures in the 40s during the day (melting the old snow) and nighttime temperatures in the 20s (refreezing it), we've got fresh powdery snow on top of several inches of ice.  Oh yeah, good times. The main roads like the highway and Holt-Lamplight are pretty clear, but our residential roads are treacherous.
(I love the word "treacherous." I can't help but think of Frau Blucher when I hear it. But I digress...)
Moose have been particularly plentiful in our yard lately.  Here's one, leisurely strolling across our lake in the morning. I don't know if it's the same one or not, but a lone moose went back and forth across the lake several times. 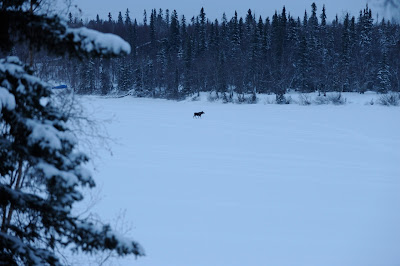 This moose spent a large portion of her day in our yard, two mornings ago. She's between our house and Brad's, considering going down the slope to the lake to escape Jim's intrusion on her privacy. Instead, she continued through the back yard and into the wooded area on the other side of the house, where she stayed for quite a long time, right where Moya could watch her best. 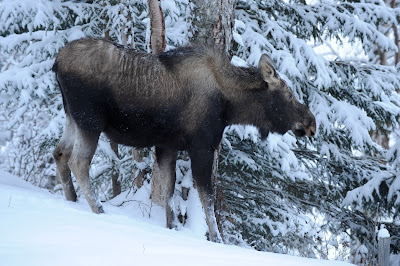 Oh, how Moya wanted that moose. She kept her eye on it as best she could, going from window to window to watch all that free-range food wander around the house eating our bushes. Once it settled into the woods, she pretty much stayed in her windowsill, keeping vigil. 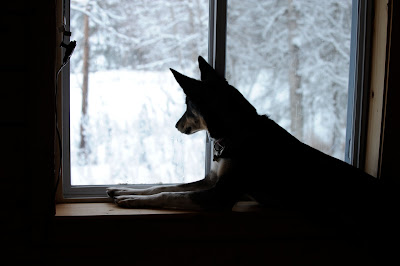 She's watching the moose in this pic, but the moose is too far to the left to be in the view of the camera.
Tomorrow morning, Jim and I will take all three dogs to the kennel in Sterling on our way to Anchorage for two days at the Rondy. I'm so excited. I'll let you know how the weekend goes!
Posted by Deanna at 8:19 PM 3 comments:

It's Been a Month

A whole month since we took James to Grove City College. It seems so much longer ago... So, what's been happening in the past month? Hm....

James seems to be doing well, from what we can tell, haha. Thank goodness for Facebook, because that's the easiest way to get ahold of him and to see how he's doing. He's got a blog going at Pookie Must Be Heard! and I'm hoping he gets some more entries and photos up so we can see a bigger window into his campus life. He's met some nice people, joined some groups, been to a contradance, met Dr. Guido Hulsmann and had dinner with him, and likes the assortment of food the school has to offer.

Here on the home front, there's been moose spending the night in our yard off and on for a while now. Sometimes only one, sometimes two. There have been a lot of moose out along the roadways, too, and here's one we saw just feet from the road on Saturday: 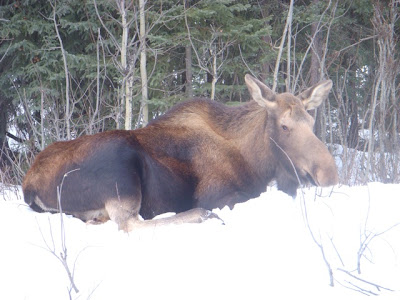 I've got a new blog going, this one to replace the craft blog I started a couple months ago, which I thought was too blah. The new one, AlaskaGirl Crafts! is tied in more to my life here in Alaska as it relates to my recipes and crafts and whatnot. I guess it's much like this blog in that it's conversational and laid-back, but is less about our family. I'd be glad for input on it if you have any to offer.
Jim took me out on my first snowmachine ride a week ago. It was pretty nice. I'd never been all the way to the other side of the lake before. Jim's also been out riding with our neighbor Lee, and Lee showed him a good shortcut to get to our property over on the other lake.
My newest big project is the fur sewing class I'm taking in the evenings, twice a week. Class is half over, and I've finished a pillbox-style beaver dress hat and a trapper-style shearling hat for myself, and am working now on a beaver trapper hat for Jim. I hope to have that done within the week, because soon it will be too warm to wear it! Our temperature right now is 42 degrees (that's ABOVE zero) and our snow is melting so fast it sounds like rain falling outside.
Our next adventure will be the Fur Rendezvous - more commonly known as the Rondy - in Anchorage later this month. A festival that began as a sporting event coinciding with the trappers bringing furs into town at the end of the season has become a weeks-long event with Outhouse Races, The Running of the Caribou, blanket toss, weight-pulling contests for dogs, fashion shows, Cerveza belly contest, carnivals, dancing and more. We need to hurry up and look for a hotel, or it might be too late!
The dogs are doing fine, albeit a little stir-crazy. Belle spends most of her day avoiding Moya, haha, and Moya spends most of her day looking for mischief. Tate... is slowing down. Her 13th birthday is next month and it would be nice if she makes it. As long as she seems happy, we're letting her be. Occasionally Moya will put her arm around Tate, which, considering Moya's extreme self-centeredness, is pretty adorable.
I guess that's about it for now. I'm gonna go look out the window and watch the snow melt. Just a reminder, though - it's not too early to start making plans to come up and visit us this summer. Get those plane tickets early while you can get a good price!
Posted by Deanna at 5:32 PM No comments:


Last Saturday, Jim and I took a day to go see the Ice Around Town ice sculptures being put up in conjunction with the Peninsula Winter Games and the Native Youth Olympics. The PWG is a children's carnival-type event where the kids can play ice bowling, go on snow machine rides, kicksled, and have all sorts of fun. If you have children and plan to be in the area at the end of January, this is definitely the place to bring them!


We were more interested in the snow sculptures than anything, though, and made it a quest to see them all without benefit of the not-yet-posted-to-their-website list of locations. Turns out we saw all but one - the one at the Kenai airport - even though we've driven past it twice since then and still haven't seen it! Oh well, on to the ones we *did* get to see... And you're gonna wanna enlarge these to see them better.
This one is in front of the Arby's in Kenai and is their oven mitt mascot: 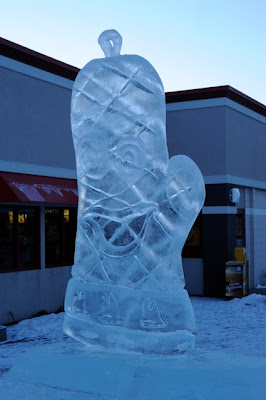 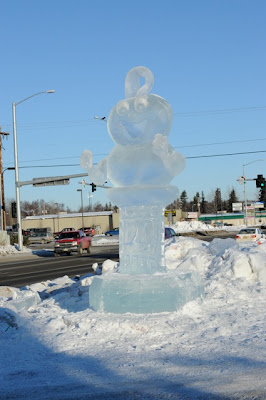 In front of the radio station is this cute retro transistor radio: 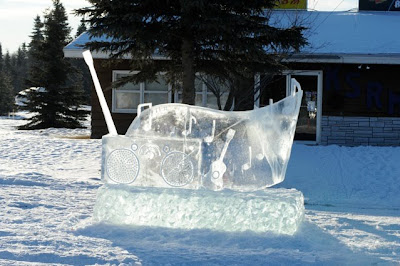 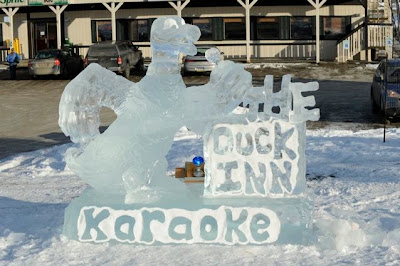 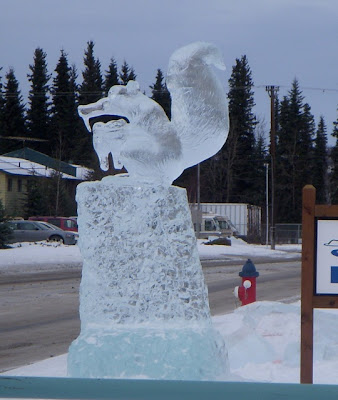 The Soldotna Professional Pharmacy has a leaping salmon: 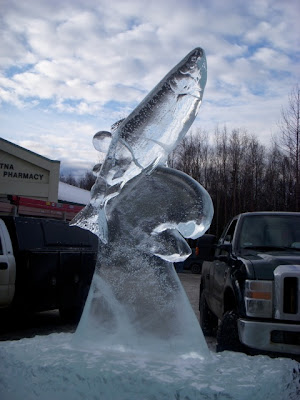 The Peninsula Food Bank has tomatoes, onion and corn (not breaching whales): 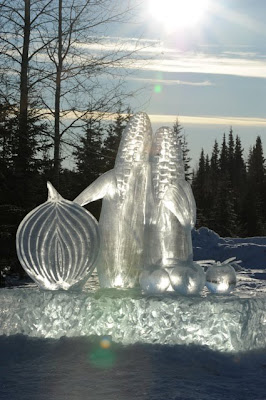 Sweeney's and Mikel's combined to put on this sculpture of a mountain man sledding downhill behind a penguin: 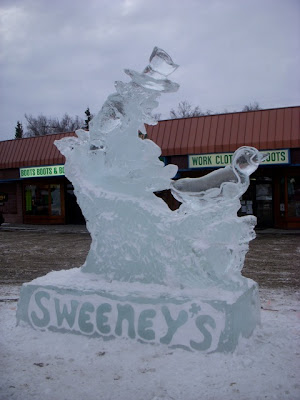 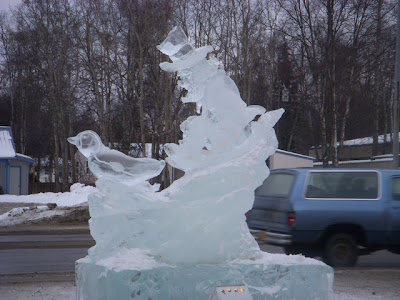 Trustworthy Hardware has a fisherman with a nice big salmon: 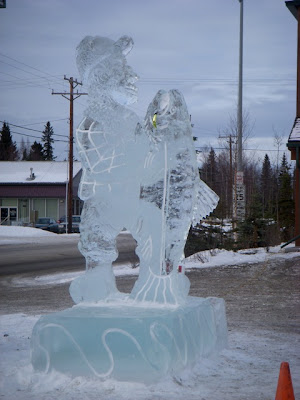 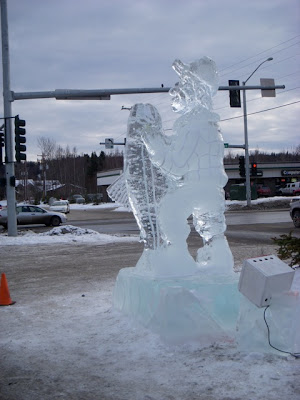 The Soldotna Chamber of Commerce has an interactive sculpture that Jim posed with: 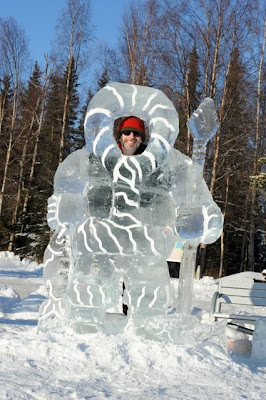 The Kenai Peninsula Borough has their logo: 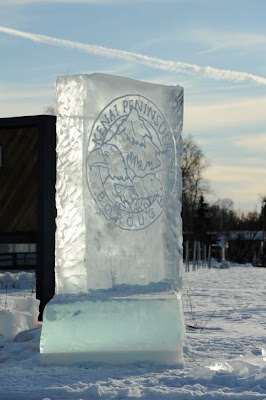 And once you get to the Sports Center where the games were held, there were even more!  This is the logo for this year's games - an ice skating polar bear: 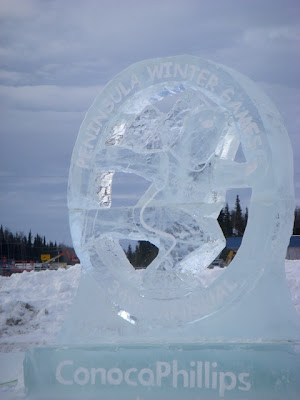 Peak Oilfield Service has their logo outside the sports center: 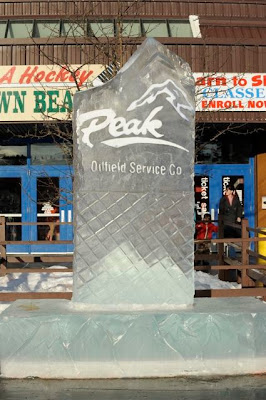 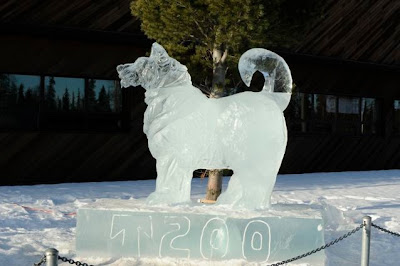 The ice slide for the children to play on couldn't be done justice with just one picture, so we took several. Here's the bears that marked the steps to climb up: 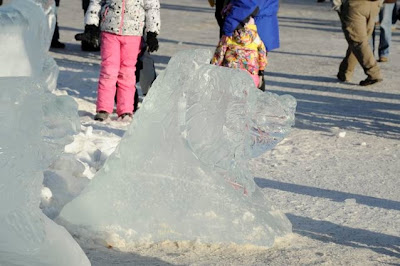 And the salmon at the bottom of the slide: 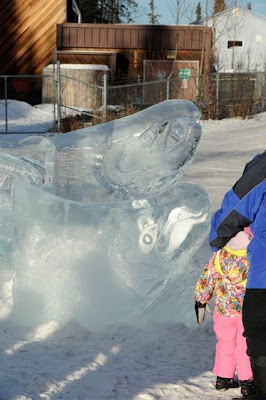 More of the slide: 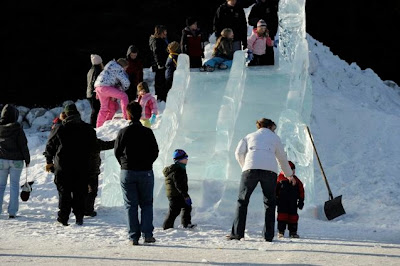 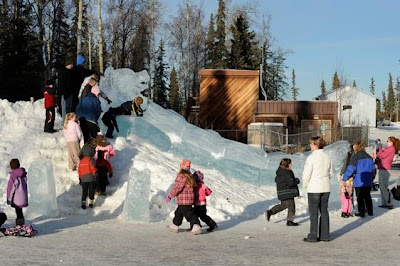 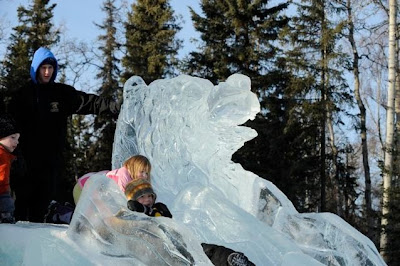 And I swiped this pic from the Peninsula Clarion because it was so much better than ours.  ;^) 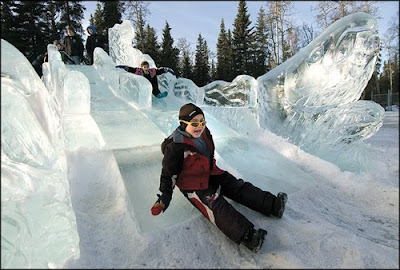 Local celebrity chainsaw carver Scott Hansen works on a bear and eagle sculpture outside the sports arena. Those of you who've visited us have probably driven past his Living Trees chainsaw carving shop and tourist attraction between Sterling and Soldotna. 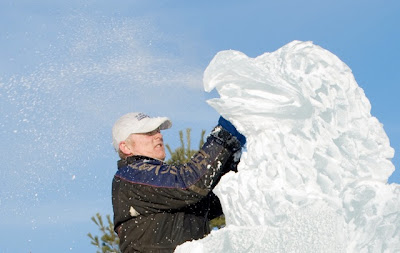 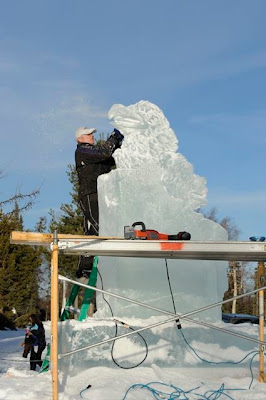 And this is so you can see how big these sculptures were: 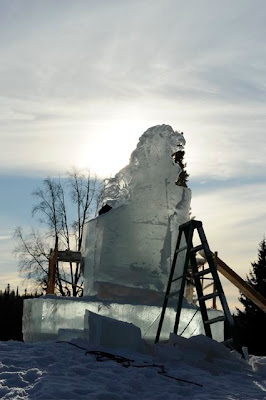 It was a lovely sunny day to drive around and see these works of art, and we had a lot of fun. Fortunately, we're in for more cold, clear weather and can expect the sculptures to be around for a while.
Posted by Deanna at 6:10 PM 3 comments: