We've learned that there are a lot of interesting things to do here, but it seems everybody expects everybody else to already know about them. It's not unusual for us to find out about something on the morning of the event, and have to make a snap decision about whether or not to try to go. The Kenai Rotary Club's Soapbox Derby was one of those things.
It was a lovely day waaay back on May 21. Jim and I decided to make a day of it by visiting the classic car show at Home Depot, visiting the Kenai Saturday Market, and watching the Soapbox Derby. Unfortunately for us, the car show and the derby were at the same time, but fortunately for us, the derby was getting a late start, so we saw about 1/3 of the cars that would eventually show up for the car show before coming back to watch the derby. 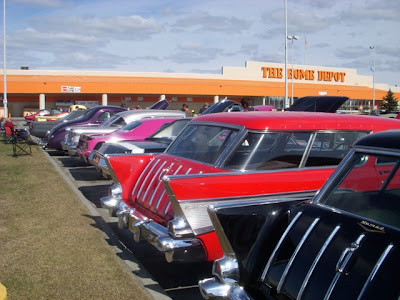 Most of the derby cars had professional paint jobs, and some of them included sponsor artwork, just like real race cars. Too bad I didn't get pictures of them all. There were a lot of cars; probably close to thirty. Some of them were dead serious about racing: 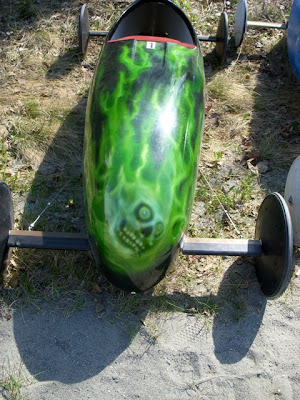 And some simply wanted to have fun: 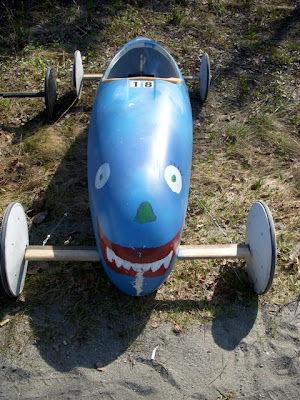 Here's the launch ramp with two derby cars being loaded onto it. Throwing the switch in the middle lowers the stop between the rails and lets both cars start at the same time. 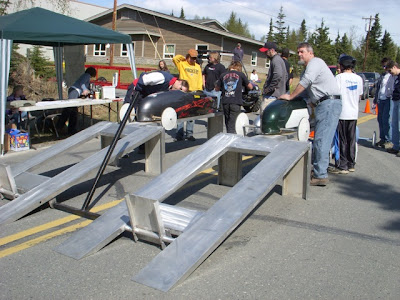 The racers are in their cars and ready to launch! 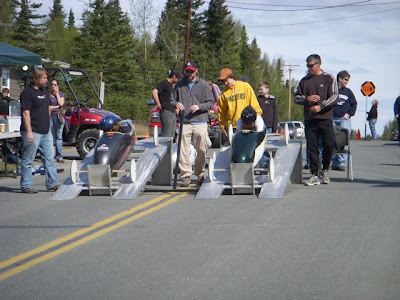 Jim and I found a nice place to sit, just past the bend in the road from the launch ramp. We were about 1/3 of the way down the road. You can just barely see the finish line in this video:
Because the derby was held on the road to a popular beach in Kenai, and the road was not closed for the derby, it took a long time to get everything set up and going. The volunteers would work a bit and racers would take a test run, then the traffic coordinators at either end of the road would clear the street and let the real cars come and go from the beach. Then they'd close the road again and the derby racers would take another turn. Due to the frequent stoppages to let real cars use the road, the race took a looong time, and we left before seeing the end. We had fun watching what we did see, though! Zoooooooooom!
Posted by Deanna at 2:30 AM 1 comment:

We had our first real good snowfall of the winter today, about an inch that stayed around and switched my brain over from Summer mode to Winter mode. And guess what?

I've managed to go the whole summer without a blog post.

Which is not to say that the summer has been boring. Quite the contrary. Most definitely not boring.

We have a mostly-finished new garage, partially-finished new digs for Smiling Otter Studio, new goats (yes, goats), taken road trips, and have had a lot of fun during this action-packed summer of 2011. Because winter is always a busy, gorgeous time here, I'm sure there will be a lot to post about, just like there was in the summer. I've got to catch up on the summertime posts but don't want to get behind on the wintertime ones, so I think I'll just mix summer with winter as I go along.

So, goodbye for now, and stay tuned for a Summertime Revisit real soon!
Posted by Deanna at 1:49 AM No comments: