Soon I'll catch you up on the start of winter here, but I have a few pictures left over from summer to show you first.
Someone on the lake has a new sailboat. Preeetty. 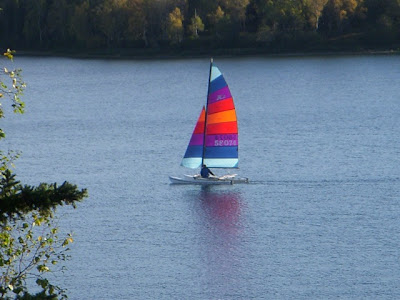 We had some troublesome trees in our back yard - two cottonwood trees that were constant sources of messy yardwork, and a birch that was dead inside. The cottonwoods were to the left of the house when looking out the back windows (they're those two, close together, in the middle of this photo): 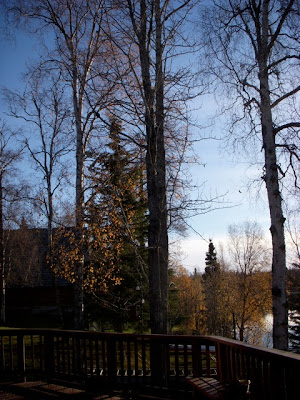 And the birch was almost straight out from the right corner of the back of the house.

Our firewood guy, Matt, came out and quickly dispatched the first of the two trees. 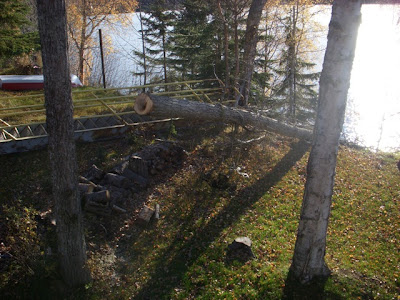 By the time he was ready to start on the second tree, the process had attracted some friendly neighborhood attention, with offers from neighbor Brad and his brother Gary to help tether the second tree to keep it from going down the slope with the first tree. Left to right, that's Brad, Matt, Jim and Gary. 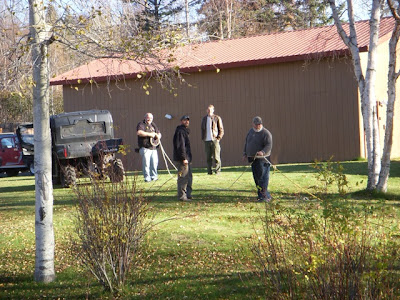 Once the trees were down, Matt cut them into rounds and Jim hauled them away. Matt also cut down some tall stumps that were left behind by the previous owners. Then Jim tethered the birch and cut it down with Brad's help. With all the wood cleared away, the view out the back has opened up so nicely. I thought the yard would look so bare without those trees, but instead, it looks so much better. And Brad's already made me a new turned wood bowl out of the birch tree!
Here's the "after" pic showing where the cottonwoods used to be: 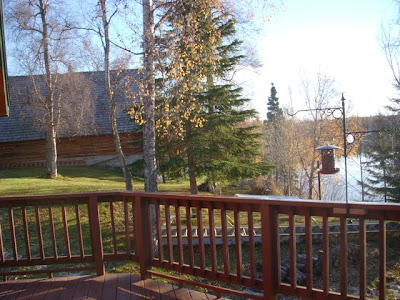 And an "after" pic of where the birch used to be. 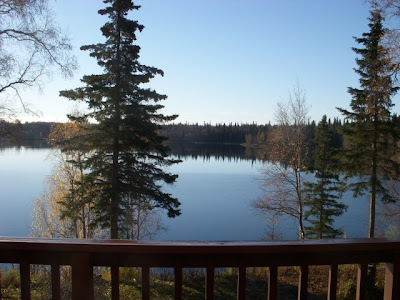 That's it for today. Soon I hope to have more pics to show you of our first snowfall, new kicksleds, Jim's chickens, the dogs, and everyday life around our house.
Posted by Deanna at 1:33 PM No comments:

I know what you're thinking - "termination dust" sounds like something that gives you a horrible disease, but it's not. Termination dust is the first light dusting of snow that tells us summer is really, truly over. Personally, I thought summer was over several weeks ago, but as of today, it's official.
The snow has already begun to melt, but here's what's left, as seen from the upstairs bathroom window: 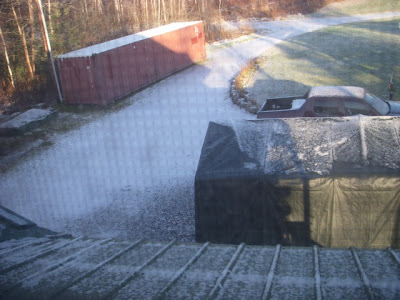 This snow will be gone by the end of the day, but now we can expect more snow to come soon and actually stick round next time. I sure hope Santa brings me a kicksled for Christmas...
Posted by Deanna at 3:03 PM No comments: