Thanksgiving dinner was a big success, even if I do say so myself. Pictures of the food didn't turn out as well as I might have liked, but we were hungry and anxious to eat the yummy food, so photography wasn't the first thing on our minds!

Our main course was (naturally) turkey. We bought a 17-pounder from Sarah at Kenai Feed and Supply. This was our first non-grocery-store turkey, and I can't imagine willingly going back to store-bought birds after eating this guy. I splurged on a little cranberry butter made by my friend Patty from local berries. The stuffing was made from barley bread (recipe here) that was allowed to go stale, then mixed with local sausage, apples, celery, and onions. Kabocha squash drizzled with Alaska's Natural honey and cinnamon was a delicious stand-in for sweet potatoes. Our greens were steamed broccoli crowns. Barley and white flour rolls finished off the savory plate, along with plenty of gravy and homemade butter.

The only (slight) disappointment I had was the barley rolls, and that was my fault. I misjudged the cooking time for the rolls and had to bake them before they had fully risen, so they were heavy. A generous slather of the best butter I made this year helped make up for the denseness.

Total deviation from the all-Alaska plan:  less than two cups of white flour and a smidge of sugar in the jelly (we didn't eat much). 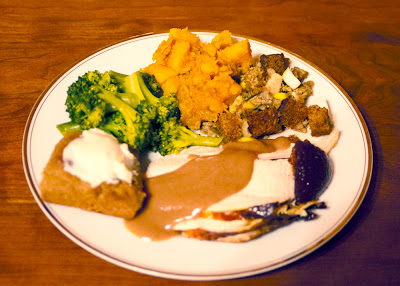 A blurry photo of our Thanksgiving goodness

Dessert - - dessert was a triumph of will. I have never worked so hard for a plate of desserts in my life, and I loved it! Starting from jars of cream gathered myself back in the summer instead of using "boughten" cream cheese certainly gave me a new appreciation for the feast cooks of yesteryear! We had honey ice cream (recipe here) with squash pie in a pat-in-the-pan crust (crust recipe here) and honey cheesecake (filling recipe here) baked in a cookie crumb crust. The cheesecake was my favorite part. I made the cream cheese from part goat's milk cream and part cow's milk cream from Peninsula Dairy. Someday soon I hope to post my adaptation for the Finnish spice cookies I made the crust from.

Total dessert deviation from the all-Alaska plan:  1/4 cup of lemon juice and a splash of vanilla. 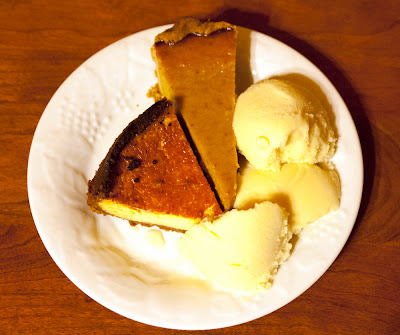